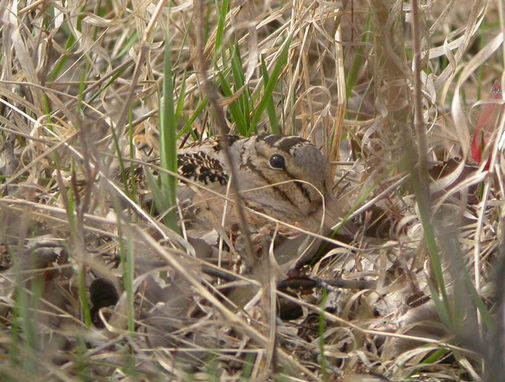 This image of an American Woodcock on her nest was taken by Tim Driscoll on April 21, 2006, in Turtle River State Park, using the digiscoping technique. The nest had been found Apr 19 by park worker Nat Bornsen when he reached down to pick up litter that was less than a foot away from the nest. The young left the nest on May 6. Assuming 21 days for  incubation, and a minimum of 4 days to lay a clutch of eggs, the nest was  initiated on about April 11, which seems very early for a ground-nesting bird in North Dakota. This may be the first woodcock nest known to birders in North Dakota although a few broods have been observed.