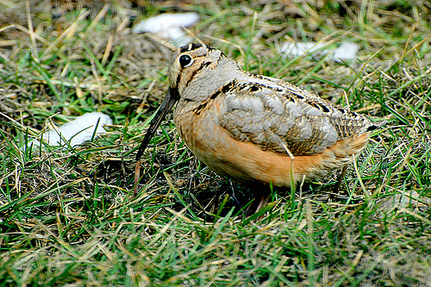 American Woodcock
The American Woodcock, a shorebird that lives in and near forests, is a real treat anytime observed. It is a fairly common breeder in the aspen copses of the  Sheyenne National Grasslands and Pembina Hills of North Dakota. There is a  breeding record for Turtle River State Park. It likely is present in many areas that we don’t know about because of its nocturnal habits. There are recent records for the Wetlands Pine and Prairie Sanctuary near Warren.

Woodcocks pass through during migration and more than one urban dweller has been surprised to find one in their backyard. Often they are flushed before seeing because of how well they are camouflaged in leaf litter. Hearing and seeing males give their flight displays during courtship is one of the great pleasures of the birding world. American Woodcock are one of the earliest shorebird migrants, often appearing before the end of March. It’s also one of the latest shorebirds to leave in fall with the latest records occurring during the first week of November.