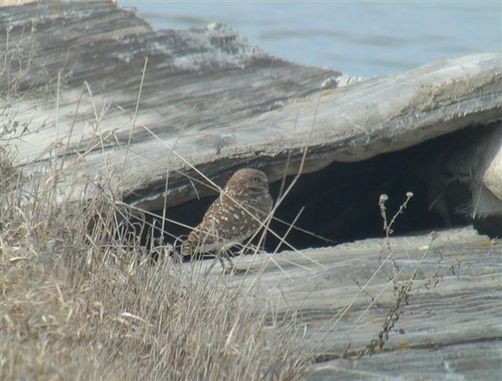 Found by Eve Freeberg NW of Grand Forks on April 11, 2006. This is the first county record in about 20 years when a pair was present much of the summer on Oakville Prairie where they once likely nested. It is interesting to note that the 2006 record occurred at the time of a big flood along the Red. A Burrowing Owl was found in the Grand Forks Memorial Park Cemetery on May 3, 1979, at the time of another major flood. Burrowing Owls have become increasingly scarce this far east because of contraction of its range on the Northern Great Plains, and because it is no longer being found in a number of sites where the habitat seems suitable. Image by Eve Freeberg.