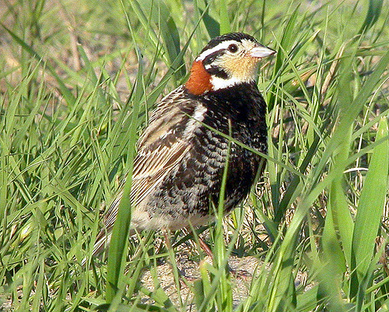 Chestnut-Collared Longspur
Stewart, in Breeding Birds of North Dakota (1975), estimated that the Chestnut-collared Longspur was the second most numerous breeding species in the state, behind the Horned Lark and ahead of Red-winged  Blackbird. Surely this is no longer true as the species has suffered greatly from conversion of native prairie to cropland and the decline of grazing over large areas of the state.

Within the Grand Cities area, the Chestnut-collared Longspur is now a very rare and highly local species. Perhaps the easternmost population in the United States occurs at Felton Prairie near Felton, MN. Although there appears to be suitable habitat in the Crookston area, the species does not occur there with any regularity so far as the author knows. This longspur species can no longer be found every year in the Grand Forks County grasslands known to locals as “Alkali Flats”. Moderate grazing seems to be needed to create suitable habitat. The decline could be due to the wet cycle beginning in 1993. The loss of a Richardson's Ground Squirrel colony in the southwest quarter of section 27 of Oakville Township coincided with the loss of breeding pairs there. The most recent record for Chestnut-collareds was by Tim Driscoll during surveys on the Grand Forks Air Force Base.

The song of the Chestnut-collared is one of the most delightful to be heard on native prairies. Hopefully they will eventually reoccupy some of their former areas.