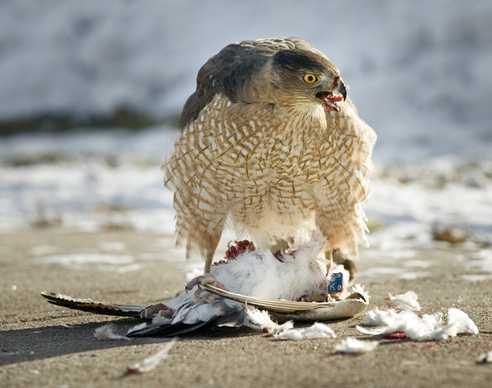 This image of a Cooper's Hawk was taken by Chuck Kimmerle on Dec 19, 2008, on the UND campus. The band on the left leg reveals that this is a bird banded by Tim Driscoll. From the band information Tim knows that this bird is a female that was banded in East Grand Forks in the summer of 2008. Tim's records indicate that she was successful in fledging young last summer. Her plumage indicates that she is older than 2 years. The image provides proof that our local nesting Cooper's Hawks will at least occasionally overwinter. Similar looking birds are most likely Sharp-shinned Hawks, but as this image demonstrates, we now know that Cooper's Hawk are a winter possibility as well.