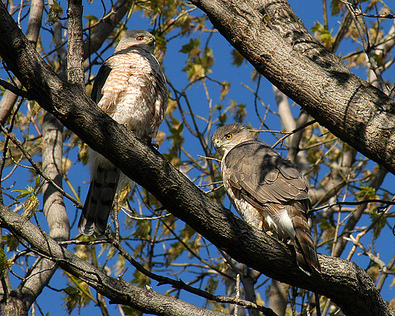 Adult Cooper's Hawks
As late as the 1980s there was considerable hand-wringing about how Cooper's Hawks were doing. Back then, even very active birders only saw a few, usually during migration. Their numbers have increased markedly  in recent years, possibly for two reasons: (1) They, like other raptors, have been doing much better since DDT is no longer used as a pesticide in this country. (2) Cooper's Hawks have taken to urban living. Many years ago, Cooper's Hawk was the prime example of "Chicken Hawk" and they were shot whenever  possible. Now that free-ranging chickens are a thing of the past, people have quit persecuting these birds. Somewhere along the way, Cooper's Hawks began to breed in the urban environment and the abundant prey they find there along with the safety of nests from predation have made them highly  successful.

The first nesting within Grand Forks occurred in about 1988. That was the year when the "kek-kek-kek" call of a  Cooper's Hawk was heard in Grand Forks Memorial Cemetery. By watching the calling bird, the nesting attempt was discovered. Back then Cooper's were widely thought to be very secretive and it was expected that the power machinery used to maintain the cemetery plus all the people visiting during Memorial Day weekend would cause the birds to abandon their nest. That nest did ultimately fail. However, in the years since, Cooper's Hawk has become a rather common nester in the Grand Forks area, and they nest in many other cities as well. Their tolerance of people and noise was illustrated in a most profound way when the Old Science Hall on the UND campus was torn down in early June a few years back. An active Cooper's nest was less than 50 feet away from the south wall of this multistory, brick building. We can't be sure, but the birds were probably incubating at the time. Despite all the noise, dust, and rubble, nesting continued. Birders' were amazed when that nesting effort succeeded in producing at least two young a few weeks after the debris had been cleared away. 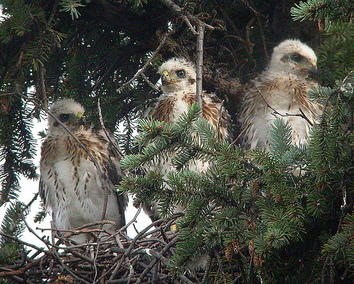 Immature Cooper's Hawks at the nest
As of 2009, an active research program by Tim Driscoll has resulted in most of the
nesting pairs in Grand Forks being banded. He and his coworkers have also banded many of the young. These efforts will result in much new knowledge about these interesting birds of prey.