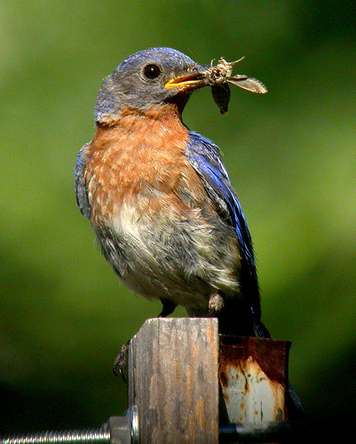 Eastern Bluebird
The Eastern Bluebird has made a dramatic comeback in the last 20 years, thanks to the setting up of bluebird trails all over North America. In the process we have learned that this is what will respond to  management practices. Not all that long ago it was rare to see one even in migration in the Grand Cities area, and there were few if any known nesting locations. This changed due to the efforts of one man, Art Schroeder, who established extensive bluebird trails in the Mekinock and Emerado areas. At times, bluebird production has exceeded 150 young/year. In addition to the expected Eastern Bluebird, Mountain Bluebirds regularly nest in small numbers at Icelandic State Park, and there has been a recent report of a nesting involving a Mountain Bluebird at Turtle River State  Park.

Eastern Bluebirds may have declined historically due to competition for nesting cavities by other species, especially introduced species such as Starling and House Sparrow. To maintain a successful bluebird trail requires considerable effort and knowledge of do's and don'ts. A typical experience is early success with bluebirds which peaks after a few years. Then there can be a decline in bluebirds as other species, especially Tree Swallows, House Wrens, and House Sparrows move in. To deal with Tree Swallows, place the bluebird houses in pairs spaced 5-25 feet apart. A pair of Tree Swallows will allow Eastern Bluebirds to use one box while they use the other. At the same time the nesting pair of swallows defend the area from
incursion by a second pair of swallows. House Wrens become more of a problem when boxes are placed too close to wooded areas. House Sparrow infestation will decrease as the boxes are placed further from human habitation. Then there are problems with various predators. To learn more about bluebirds, visit http://www.nabluebirdsociety.org

The Greater Grand Forks Greenway will provide extensive, excellent habitat for Eastern Bluebirds. The establishment of a trail would make a wonderful project for someone so inclined.