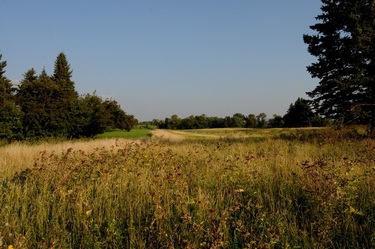 Koininia Area near Elmwood Access
Access:
From the intersection of Washington St and 32nd Ave S, drive east on 32nd Avenue until it curves left onto E Elmwood Drive (see on Map). The entry into the Greenway is just ahead. The area behind the dike, long known as Koininia, was once the site of a private residence whose owner made a number of plantings including the line of crabapples. During construction of the dikes, some of the area was used as a source of clay. However, good habitat remains, and disturbed areas are being restored. 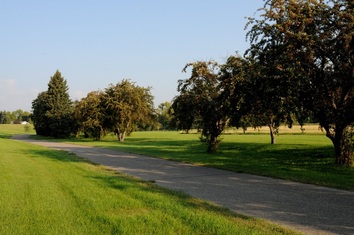 Rows of Crabapple Trees in Koininia
Because of its open fields, rows of crabapples, and clumps of spruce trees, this area consistently attracts species that are hard to find elsewhere within the city. In winter, the crabapples attract both species of waxwings, Pileated Woodpecker, House and Purple Finches, and robins. It is a good place to find Northern Shrike in winter, and Pine Grosbeak in an irruptive year. Two Eastern Bluebirds were found on a recent Christmas Bird Count. The spruce trees at times host such species as Northern Sawwhet Owl, both species of crossbill, Red-breasted Nuthatch, and Golden-crowned Kinglet. 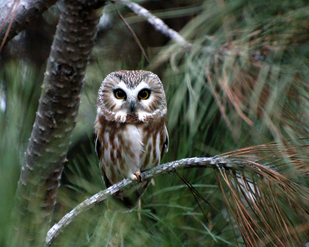 Northern Saw-whet Owl
The grassy areas, when left unmowed, have drawn Bobolink, Savannah Sparrow, LeConte's Sparrow, and Sedge Wren. Weedy areas on the south side of the property draw large numbers of migrant sparrows. The native woodland located just to the north is one of the best for finding Pileated Woodpecker and Eastern Screech Owl.The area to the right of the Elmwood entry is a former neighborhood. The small grove of spruce trees can be checked for species that favor conifers.