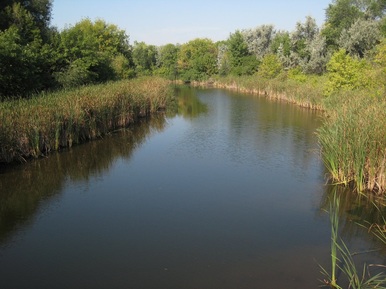 View of Coulee from Pedestrian Birdge North of 6th Ave
Access:
A multi-use trail runs along the east side of the coulee. If you don't have the proper permit to park on the UND campus, park on a side street and walk along 6th Ave N to the bridge across the English Coulee (see on Map). Then walk north along the multi-use trail.

The different habitat here makes it likely that a different mix of species will be seen here than in the nearby cemetery or along the Red River Greenway. Furthermore, the birds are more likely to be present near eye level. 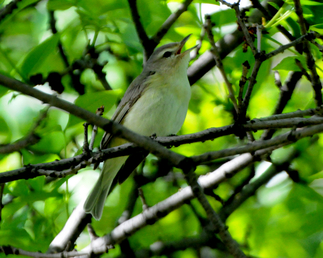 Warbling Vireo
Along the coulee banks, a dense growth of boxelder is found in many places. On the other side of the trail is first a thick shrub row and then what appears to be the remnant of a nursery. Still further along, a shelterbelt dominated by willow occurs.

A housing development on the opposite side of this latter windbreak has increased the attractiveness of the area to birds, primarily because of bird feeders there. 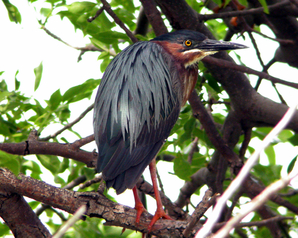 In the coulee and at water's edge, watch for Wood Duck, Mallard, Blue-winged Teal, Green Heron, Solitary Sandpiper, and Spotted Sandpiper. The first nesting record for Northern
Cardinal in the Grand Forks area occurred in the large thicket behind the Wellness Center in about the year 2000. A high density of Yellow Warblers occurs from mid-May to early July. Nearer to Highway 2, Lark Sparrows nested in 1997. 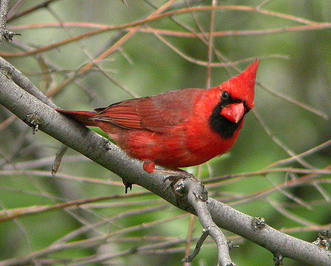 Northern Cardinal
Other nesting species include Brown Thrasher, American Goldfinch, Chipping Sparrow, Warbling Vireo, Baltimore Oriole, and Orchard Oriole. Although most any  warbler species can be found during migration, this is an especially good area to look for ground foragers such as Palm Warbler, Northern Waterthrush, and Ovenbird.  Unusual winter records here include Gray Jay, Varied Thrush, Sharp-tailed  Grouse, and Townsend's Solitaire.
Next Site