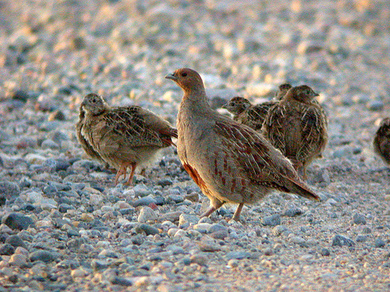 Gray Partridge
This can really be a tough species  to find, especially in Summer when the vegetation is high and birds are widely dispersed as pairs. The saying that "Gray Partridge are everywhere but nowhere to be seen" seems apt. It is not all that uncommon, especially in its preferred habitat around farmsteads.

This is not a very vocal species so using your ears will not help, except when they fly out from under your feet, at which time their loud calls and exploding wings sends the heart a-thumping!!  In winter, look especially around feedlots where hay is being fed, or look for dark lumps in snow-covered fields. At any time of the year, it tends to gather along roadsides in the very early morning. Some specific areas to try are along the extension of DeMers Avenue as you head out to Emerado, Arvilla, and Larimore. Pay particular attention to the railroad right-of-ways. One can also look around the city landfill. Like some of the other grouse, the best strategy  may be to look for almost anything except partridge. Consciously looking for them seems to jinx the effort!! Again, this is a fairly common bird. But finding them when you want to, especially in Summer, can be quite the challenge.