The Greenway is the area along the Red and Red Lake Rivers that lies between the permanent dikes erected after the flood of 1997. Visit www.grandforksgov.com/greenway to learn more about the Greenway and to download maps showing multi-use trails and access points. Approximately 20 miles of hard-surfaced, multi-use trails are available for hiking and biking. In addition, unpaved trails are often present closer to the river that provide additional birding opportunities for the more adventuresome. A city map will be useful in navigating the two cities. 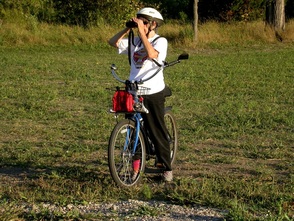 Birding by bicycle
Some birders prefer to bird the Greenway from their bicycles with the loop between the North Pedestrian Bridge and the Pat Owens Pedestrian Bridge being particularly popular. Others bird one segment at a time, driving to each access point of interest. Each segment can easily take 1-2 hours to cover.

On the North Dakota side, three areas within the Greenway can be birded from an automobile: Riverside Park, Lincoln Drive Park, and the Lincoln Golf Course parking area. 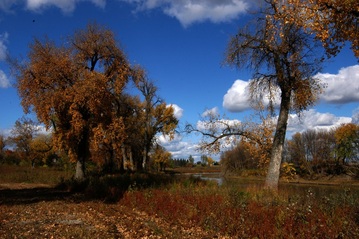 Red River in the fall near Sunbeam Trail Access
Visitors to Grand Forks/East Grand Forks can camp at the Red River State Recreation Campground, located between US 2 and the commercial area of East Grand Forks, MN. A BIRDS OF THE GREENWAY Checklist is available at the campground office located on the south side of the campground. This checklist provides information on the seasonal occurrences and relative abundances of the approximately 250 species regularly found in the Greenway, which for checklist purposes includes the East Grand Forks Sewage Lagoons. The list also denotes nesting species. 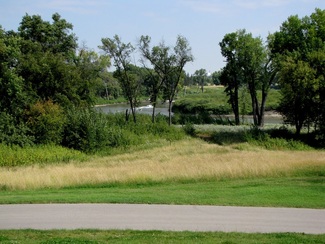 South of Kannowski Park
When enjoying the Greenways, it should be appreciated that what we increasingly regard as wonderful public space came about after one of the greatest disasters this country has experienced. After the flood of 1997, numerous homeowners were bought out to make way for the dikes and flood walls that were located far enough back from the river to be stable and defensible. The properties of many owners had extended all the way to the river's edge. Today it is often hard to imagine the homes and yards that used to be here, but the evidence is still there in the trees and shrubs that were left behind. These add interest to the Greenway and support a greater diversity of birds than would otherwise be present. 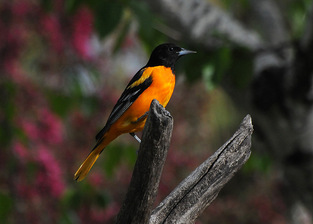 Baltimore Oriole
The Greenway will evolve over time. This is especially true of the space between the bike paths and the river, which will be allowed to become reforested. Stands of cottonwoods, willow, green ash, and boxelder are already becoming apparent as of 2009. These areas of tree growth come at the expense of the grassy areas. In other places, stormwater retention ponds have been installed that are acquiring their own vegetation. As the Greenway changes, so will its birdlife.

The North Dakota Side of the Greenway

The Minnesota Side of the Greenway