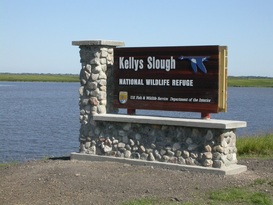 Kellys Slough sign by main pool
Kellys Slough (see on Map) is known to many birders across the country as a gem of a place to find waterfowl and other wetland species in extreme eastern North Dakota. Because it is situated in an intensive agricultural area, it undoubtedly attracts many migrants because there is no other nearby  place to stop and rest. The Kellys Slough complex is managed by the Devils Lake Wetland Management District of the U.S. Fish and Wildlife Service in Devils Lake. Some areas in the complex are designated as Waterfowl Production Areas, while others have National Wildlife Refuge status. WPAs are open to non-vehicular access year-round. In contrast, areas designated as NWR are posted  against unauthorized entry. It is also important to keep in mind that WPAs and NWR are intermixed with private lands. 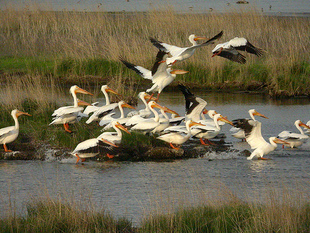 American White Pelicans
To reach the Slough, take US 2 west eight miles from the US 2 / I-29 interchange. Watch for the sign to Kellys Slough NWR where you will make a right and drive North.

The Slough is straight ahead in a little more than three miles. When you reach the site, you will notice that the road serves as a dam for the lake on the left. A nesting island is located in the west central portion of the lake. On the right is a shallow area that can range from being completely dry to holding several inches of water. 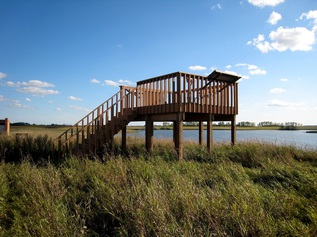 Viewing Platform
The USFWS manages water levels to  optimize shorebird habitat. A wide variety of shorebirds in excellent numbers can be found here at times. Just a bit further north on the left is an observation deck that is equipped with a permanent spotting scope. An information kiosk is also located here, and you will note other locations that have information signs. The deck is a good vantage point from which to look well behind the west shore of the lake where White Pelicans and various waterfowl tend to gather. Notice also the abandoned railroad bed that goes east and can be hiked to afford additional views of the wetlands. 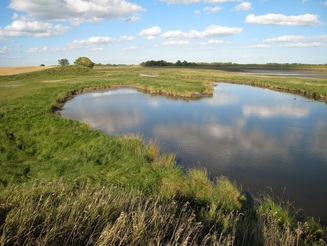 Wetland to north at end of old railroad bed
This part of the Slough attracts about all of the waterfowl and shorebird species that can be expected in this part of the state. The earliest waterfowl typically arrive about March 15, and linger until freeze up, which usually occurs about November 1. Several hundred nonbreeding White Pelicans usually spend considerable time during the summer. 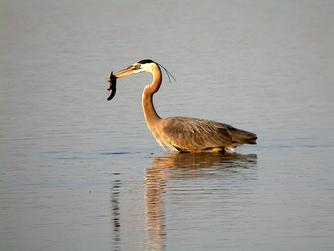 Before continuing your trip from this area, note that the Slough proper runs from Southwest to Northeast.

Starting at the observation deck parking lot, there are three options for where to go next. 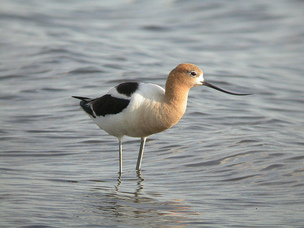 American Avocet
From the observation deck parking lot, continue a little more than one mile North, turn right on CR 11 (paved), proceed one mile, turn right and go South to the crossing of the Slough. This area is quite saline and can be teeming with shorebirds when the conditions and season are right. The area is often the first to flood during spring runoff with the result that it is an excellent place to look for early migrants. In summer it often dries out completely and there are few, if any, birds to be seen. The area on the right is generally excellent for waterfowl and waders from Spring thru Fall. 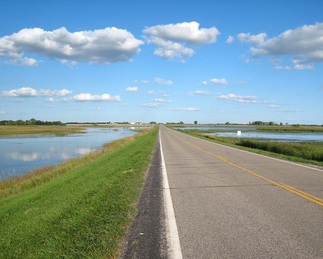 County Road 11 wetlands
From the observation deck parking lot, continue a little more than one mile north and turn left on CR 11. In less than ½ mile shallow alkaline wetlands occur on both sides of road. The area on the north is often the best and most accessible area for shorebirds. Look especially for Avocets, which sometimes nest here. Piping Plover, Cinnamon Teal, and Black-necked Stilt have occurred here. The only state record for Mottled Duck was recorded here. 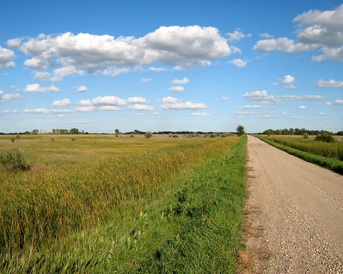 Road through grasslands
From the observation deck, go North less than ½ mile to the road that goes left. Proceed West for two miles. It is worth driving slowly as the habitat is varied and especially attracts those species that are tolerant of the taller grasses. The Russian Olives here and farther down the road sometimes host shrikes (either species, depending on the season) and Short-eared Owls. At the end of two miles, turn left and drive a little more than two miles South at which point you will again cross the Slough. The area on the right is WPA (accessible on foot) while the area on the left is NWR (closed to unauthorized access). 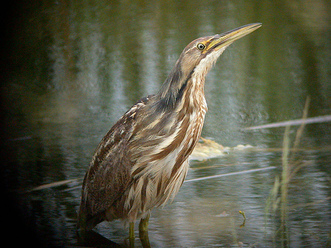 American Bittern
The habitat in this part of the slough is quite different from before in that it is dominated by thick stands of cattail and phragamites. American Bittern, Sora, Virginia Rail, Blue-winged Teal, Marsh Wren, and Common Yellowthroat often occur very near the road. On the south side, just before climbing the hill, there is considerable wet meadow habitat. You can park at the top of the hill and walk west to reach the edge of the slough. By working this area carefully from late May to early July, you should be able to find or hear American Bittern, Sora, Virginia Rail, Sedge and Marsh Wrens, Common Yellowthroat, LeConte's, Swamp, and Nelson's Sparrows, and Yellow-headed Blackbird. There is one record for Least Bittern. 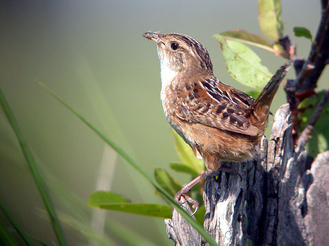 Sedge Wren
If you want to search another area for these same species, go back north across the Slough and take the road going west. Drive one mile, turn left, and proceed to the Slough crossing in another mile. Be aware that roads here may not be passable under wet conditions. Drive to the location of two small bridges that hosts hundreds of nesting Cliff Swallows. A minimum maintenance road going east has excellent Sedge Wren / Marsh Wren / LeConte's Sparrow / Nelson's Sparrow habitat. The road going west from the bridges leads to the Air Force Base lagoons in about 1/4th mile. Although the lagoons are posted, major portions can be seen from the road. US 2 can be reached from the twin bridges by driving South one more mile. Grand Forks is to the left, Emerado and the Air Force Base is to the right.