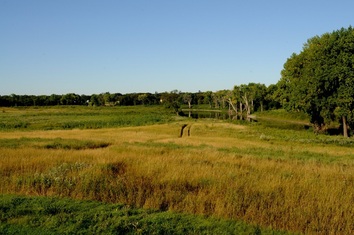 Field in Large Bend of Red River Just South of Point Bridge
Access:
When coming from the north over the Louis Murray Bridge, turn right at the stop light and then right again into the parking lot. If coming from the west across
Point Bridge, look for the parking lot on the left, just before the stoplight, which is at the intersection of 1st St SE and 2nd Ave SE (see on Map). Cross the street and take the multi-use trail going south. This segment covers the area from the Point Bridge to the Pat Owens Pedestrian Bridge. 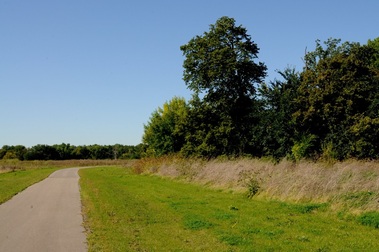 The early part of the trail skirts a large area to the west that lies in a large loop of the Red River. This area is in transition as it is being allowed to revert to a natural state. As a result, the species that favor this area will change over time. 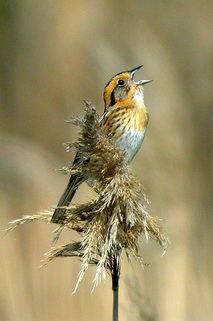 An area just south of the Point Bridge has been planted to native grasses and forbs. Where left unmowed, this habitat has attracted such prairie species as Sedge Wren, Bobolink, LeConte's Sparrow, and Nelson's Sparrow. An oxbow is favored by a variety of ducks and Great Blue Heron.

The dense shrubby area further in has not been explored, but appears to be a good spot for Black-billed Cuckoo. 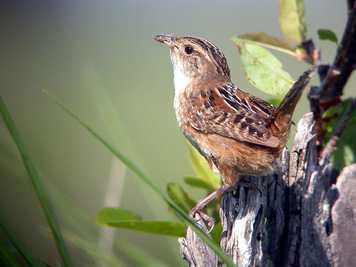 Sedge Wren
Further along the trail, there is riverine forest, along with ornamental trees remaining from the time this was a residential area. During the nesting season, look for Red-headed Woodpecker, Cedar Waxwing, Baltimore Oriole, Rose-breasted Grosbeak, and Indigo Bunting. As the trail turns westward toward the pedestrian bridge, old field-type habitat exists where one may find Dickcissel, Bobolink, Clay-colored Sparrow, and Sedge Wren. North of the pedestrian bridge, note the emerging cottonwood forest.