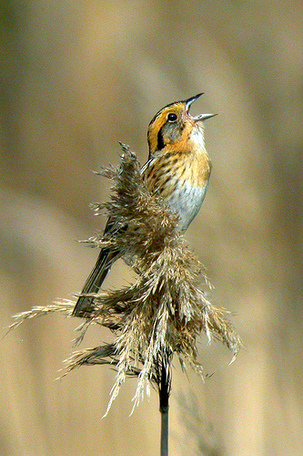 Nelson's Sparrow
North America's Sharp-tailed Sparrows were recently split into two species: the Nelson's Sharp-tailed Sparrow that resides mostly in the interior, and the Saltmarsh Sharp-tailed Sparrow found in coastal areas. In 2009, the name of the former was shortened to Nelson's Sparrow. With the split, birders have taken interest in finding the Nelson's species for their lifelist with the result that this is one of the more sought-after species in North Dakota. The most reliable place to find Nelson's in the Grand Forks area is the western end of Kellys  Slough where there is a mixed growth of sedge, cattail, and phragmites (see the site guide for Kellys Slough).

Knowing it's rather explosive sneeze-like song can be a great help in finding it's location on an exposed perch in a sea of grass or cattail. Nelson's are also rather common at times in  the wetter areas of the alkali grasslands with the Prairie Chicken Management Areas being among the best. Although always a surprise, they have been observed singing in fields of small grain in late June.

They typically arrive on their breeding grounds in late May and early June. This is a species that sings even more during the nighttime hours than during the day.