Sightings of this species in the Red River Valley have increased dramatically since the 1970s. Wandering or migrating individuals may be seen almost any time of the year, but spring and fall are clearly best. The increase in Peregrine sightings is likely due to the decrease of DDT in the environment as well as the reintroduction of birds into cities throughout the East.

A young female photographed in the Grand Forks area in 1986 was later identified as Muffin, the first Peregrine to nest in downtown Minneapolis beginning in Spring 1987. Her story is told at http://www.raptor.cvm.umn.edu/raptor/Learn_About_Raptors/PeregrineRestoration/June142007.html. 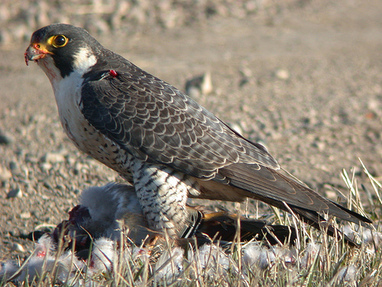 Peregrines have nested in Fargo since 2001. The first nesting in Grand  Forks occurred in 2008 when Bear from Fargo and Terminator from Brandon, MB, nested on the Smiley water tower. They raised one young named Ozzie who unfortunately was electrocuted when he hit electrical wires during one of his first flights. Bear did not return in 2009. His younger brother, Roosevelt, paired with Terminator and two of their young, Smiley and Alice, are believed to have survived to migrate. If the pair return in 2010, they will have to find a new home as the Smiley water tower will be torn down.

Note: In the fall of 2009, the nest box was moved to the UND Tower and the pair returned in the Spring of 2010 and successfully nested once again.