Access:
Take US 2 east from Washington Ave. As you approach the Kennedy Bridge, take a left onto N 1st St., which goes directly into the Greenway where parking is available (see on Map). Just after passing through the dike opening, a meeting house with restrooms is available on your left. 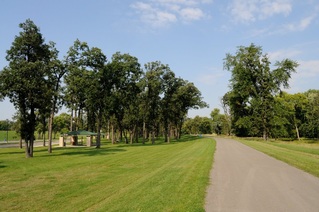 Multi-use trail in Riverside Park going west
Once in the park, you can bird to your left (westward) along the multi-use trail until you reach Riverside Dam. You can also proceed to your right (eastward and then south) to the Kennedy Bridge across the Red River. This latter sojourn will take you through a former residential neighborhood that was abandoned after the 1997 flood. However, non-native trees and shrubs remain that diversify the habitat for birds. Unpaved trails are available nearer the river. 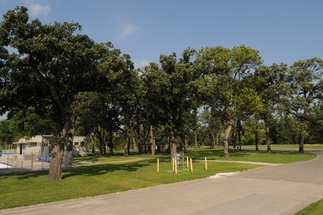 Numerous Oaks in Riverside Park
Riverside Park has the best stand of native oak on the ND side of the river. The oaks are especially attractive to passerines, including vireos and warblers, when in bloom in May. In summer, watch for Red-headed Woodpeckers, Eastern Bluebirds, and Eastern Wood-Pewees.

Along the river, the excellent stand of mature cottonwoods with heavy undergrowth is an excellent place to look for migrant passerines including Ovenbirds, Northern Waterthrushes, and Mourning Warblers. 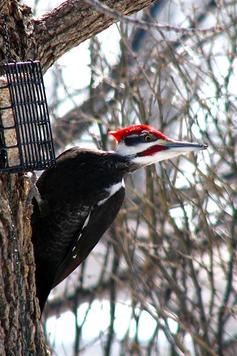 Pileated Woodpecker
At river's edge, you might see Spotted Sandpiper or Belted Kingfisher. Much of the park is left unmowed and this provides habitat attractive to migrant sparrows and finches.

Downy, Hairy, and Pileated Woodpeckers can be seen here anytime of the year, along with Black-capped Chickadees and White-breasted Nuthatches.

The Kennedy Bridge hosts a large flock of pigeons, which may account for why a Red-tailed Hawk sometimes winters in that area. For the same reason, it should be a place that will attract the occasional Northern Goshawk.