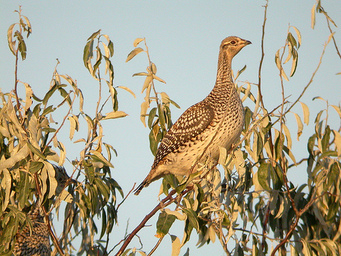 Sharp-tailed Grouse
This grouse is fairly common and widely distributed throughout the  grassland belt of Grand Forks County that stretches from ND 15 west of Thompson  beyond
the Prairie Chicken Management Areas northwest of Manvel. However, like Gray Partridge, they almost defy looking purposely for them, especially during the
nesting season.

In fall and winter they gather into flocks that can most easily be found by checking the remnants of sunflower and corn fields that border the grasslands. Refer to the site guides for Prairies of Oakville Township and the Greater Prairie Chicken Management Areas for descriptions of routes that can be driven. 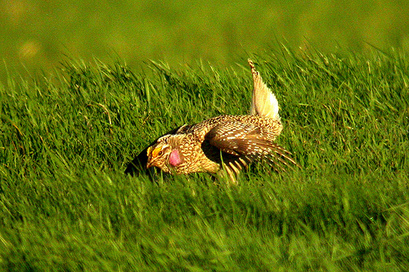 Sharp-tailed Grouse displaying
The best time to find them is in early morning when they come to roadsides to pick up gravel, and also gather in scattered trees on the prairie. They sometimes forage in Russian Olive trees which otherwise are an invasive species that is a scourge to grasslands. Often the only glimpse of this species is as it flies away. Besides looking for the narrow, white-bordered tail, watch how the birds fly as they typically beat their wings rapidly and then glide. This helps to distinguish from Gray Partridge, but remember that Greater Prairie Chickens are also present in the area. Sharp-tailed Grouse disperse somewhat in fall and winter and on very rare occasion been seen flying over Grand Forks, and observed along the Greenway and the English Coulee.