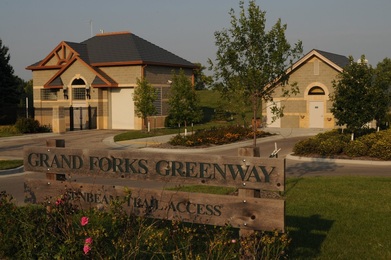 Access:
The north end of the Sunbeam Trail is reached by driving south on Belmont Road from 32nd Ave S (see on Map). A parking lot is available at the Trail Head. Although the multi-use trail initially goes north, it soon curves southward and proceeds to the 47th Ave S Access. An older hard-surface trail runs closer to the river and may be better for birding. 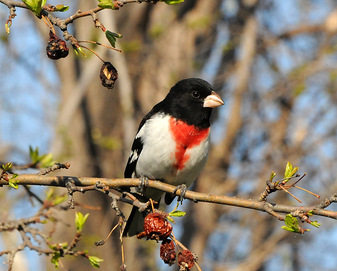 Rose-breasted Grosbeak
The multi-use trail passes through a large expanse of tall grass, some of which is quickly being reforested naturally. As grassland, it has hosted Bobolinks and Savannah Sparrows during the summer. A Purple Martin colony has been present for several years in the neighboring residential area.

The trees along the river can be good for kingbirds, and an American Kestrel probably nested here a few years back. Upon approaching the south end, a shrubby thicket along the river is home to Yellow Warblers and Song Sparrows during the nesting season. Other nesting species to look for include Rose-breasted Grosbeak, Indigo Bunting, Baltimore Oriole, Gray Catbird, and Eastern Bluebird.