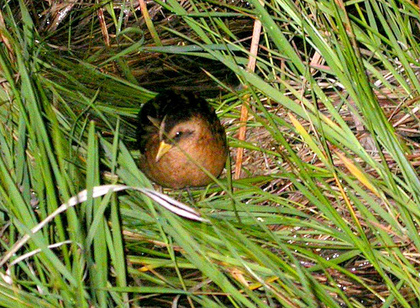 Yellow Rail
With the beginning of the wet cycle in 1992 it was a real surprise to find out how common this species can be in Grand Forks County. They are generally distributed in the wet saline grasslands that stretch from ND 15 (west of Thompson) to the north border of Grand Forks County. Stopping and listening along section roads at night can be productive anytime from early May to late August, depending on the moisture  conditions. Some of the areas to try are County Road 5 between about 3 miles north of US 2 until you get to the Turtle River (also try the roads going east off of 5 in this area), and the County Road going North of Mekinock until and even past the Intersection with County Road 33. Listen for the tic sounds that are delivered in twos and threes. It can be imitated rather nicely by clicking two quarters or two small stones together.

At present the timing of the breeding (calling) season for Yellow Rails in Grand Forks County is not well understood. However, it has been learned that heavy rain (2 or more inches) falling in a short period in June or July seems to flood the saline  areas and result in calling Yellow Rails about 2-3 weeks later. For a few days after the rain, night sounds are dominated by amphibians with the volume being quiet impressive. As this activity dies down, the Yellow Rails become more active. Night birding is a pleasure all in itself as a number of species are quite vocal at night including Sora and Virginia Rails, Sedge Wrens, Common Snipe, and Le Conte's and Nelson's Sparrows.