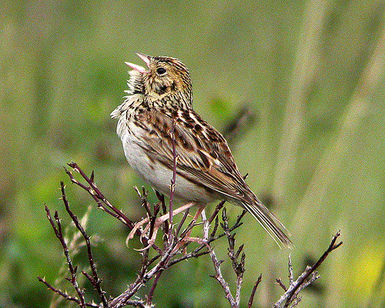 Baird's Sparrow
This species of grassland sparrow is one of the two most sought-after species
by out-of-state birders. It may most readily be found at Lostwood National  Wildlife Refuge.

Baird's are not found every year in Grand Forks County, but this definitely is a species to watch and listen for when birding in or near fields of medium length grass. The most reliable areas are the grazed pastures in Oakville and Fairfield townships.

The song of this species is notable for its pleasant-sounding, clear musical trill that is readily distinguishable from the songs of Savannah and Grasshopper Sparrows.

The job of finding this species is made much easier by knowing its song. Peak months of occurrence are June and July although there have been records as early as May 15.