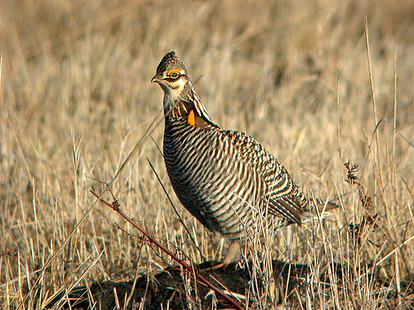 The population then exploded westward across the state as a result of the farming practices in the early years. A decline in the population had begun by the 1930s. A population in the Sheyenne Grasslands has persisted to the present day, however, the rand Forks population disappeared by the late 1970s despite the setting aside of the Prairie Chicken Management Areas north of Mekinock and nw of Manvel. In the early 1990s, a vigorous reintroduction program was begun that has resulted in a substantial population as of 2002. It is not clear that the conditions that caused the original population to die out have been reversed, however, the substantial acreage enrolled in the Conservation Reserve Program may be helpful.  The reintroduced population has spread south of US 2 to Oakville Township where there is at least one active lek. The Grand Forks County population is separated from a stable population SE of Crookston by more than 50 miles of cropland.

Directions for reaching the Prairie Chicken Management Areas are given under the Site Guides link. The best time to see the birds is when they are active on  their leks, which is from February into early June. Observers should stay at a sufficient distance so that they do not disturb the birds. Sharp-tailed Grouse  leks also occur within the county, and before the die-off in the1970s, both  species were observed to be using the same leks.