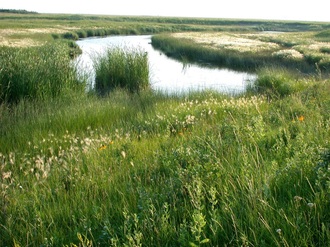 Coulee in Oakville Township
A few tracts of native prairie, known to locals as the Alkali Flats, survive in Oakville and Fairfield Townships. Several grassland species are found here that are more typical of the prairies found farther west. Some of these species are at the eastern limit of their range.

To reach the best examples of these prairies, take Old Hiway 81 (Washington Avenue) south out of Grand Forks for about three miles past 32nd Ave S. Turn right on CR 6 (aka Merrifield Road) and drive west for nine miles where you will find a section line going North that is fenced on both sides (see on Map). 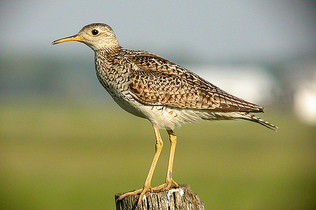 Upland Sandpiper
On the right is 3/4th of a section of School Trust Land, which is native prairie. School Trust Lands are leased for grazing. Information about gaining access to such lands can be found at http://www.land.nd.gov/surface/PublicInfo.aspx. However, even if not posted, it is unwise to enter when cattle are present. The land on the left (west) of this section line is private. PLEASE RESPECT PRIVATE LANDS HERE AND ELSEWHERE. Although many of the species can be observed by pulling off the main road, you can legally walk as much as one mile north within the fenced corridor at which point you come to a T. 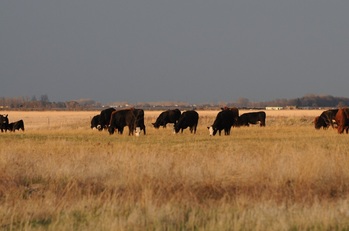 Cows grazing on prairie
A similar fenced corridor goes both west and east from this point. By walking, one's chances of finding the rarer species are increased. With the proper amount of grazing, these lands are attractive to Upland Sandpiper, Marbled Godwit, and Western Meadowlark. There are also records here for Chestnut-collared Longspur, Sprague's Pipit, Baird's Sparrow, and Eastern Meadowlark. Sprague's Pipit and Baird's Sparrow may be more likely to occur in dry years. 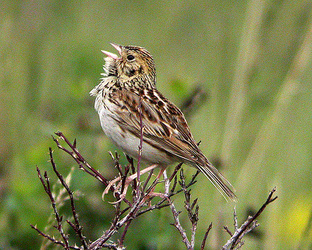 Baird's Sparrow
Grasshopper Sparrow can be fairly common. Wetter years seem to bring higher numbers of LeConte's Sparrow, Wilson's Snipe, and Nelson's Sparrow. Savannah and Clay-colored Sparrows are common. Both Sharp-tailed Grouse and Greater Prairie-Chickens are in the area although very hard to find in most seasons. Northern Harrier is present every year. Short-eared Owl can be rather common when the vole populations are high. 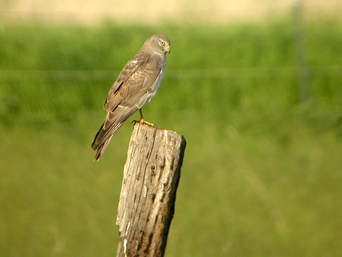 Northern Harrier
To continue looking for prairie species, proceed west for two more miles and turn right. In 1.5 to 2 miles, another excellent prairie occurs on the right (see on Map). For several years a pair of Ferruginous Hawks nested in the area, some 100+ miles beyond their usual range. Watch for Black-billed Magpies, Western Kingbirds, and Red-tailed Hawks. 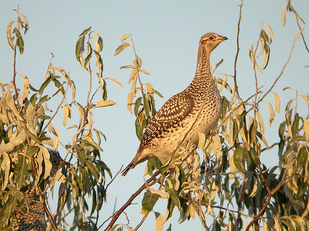 Sharp-tailed Grouse
Proceeding farther, the maintained road makes a left turn. A minimal maintenance road goes right (east) and a rather large colony of Richardson's Ground Squirrels used to be present on the hill on the right. This was one of the last reliable places to find Chestnut-collared Longspur, and was one of the major hunting grounds for Ferruginous Hawk. However, the squirrels, the hawks, and the longspurs are gone. Perhaps they will one day again be present. It is still a good place to find Sharp-tailed Grouse and, occasionally, Greater Prairie-Chicken. 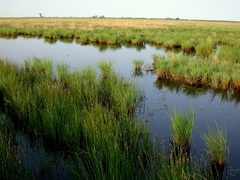 Ephemeral wetland in Oakville Township
Returning back to where the maintained road turns left, go west one mile, and then north for one mile. At this point another minimal maintenance road (not passable when wet) goes east for about two miles. As you enter this road, a section of native prairie belonging to the University of North Dakota is on the left. This section known as "The Oakville Prairie" is described at http://www.npwrc.usgs.gov/resource/habitat/natareas/oakville.htm. University permission (701-777-2621) should be obtained before entering the property. However, from a birding standpoint, the birds of interest can be seen and heard from the road. 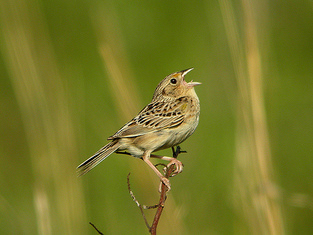 Grasshopper Sparrow
The nearby willow thickets are good for Willow Flycatcher, while the ungrazed grassland hosts Bobolink amongst a number of other species including Clay-colored Sparrow. By going east one mile, a private holding that is grazed is found on the left. In past years, but no longer, this was one of the more reliable places to see and hear Baird's Sparrow, Grasshopper Sparrow, Sprague's Pipit, and Chestnut-collared Longspur. Loggerhead Shrike may occur anywhere in the grasslands and one was seen here in the summer of 2009. At this point, return to the maintained road and continue north to the T-intersection. 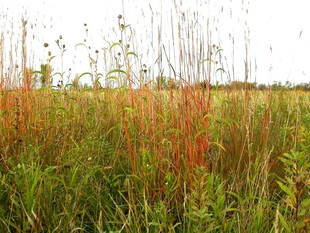 Big Bluestem and Forbs
Turn right on CR 4, which is an extension of DeMers Avenue. This road can be taken back to Grand Forks; or, by going north at the earliest opportunity, US 2 can be reached in one mile.
Next Site