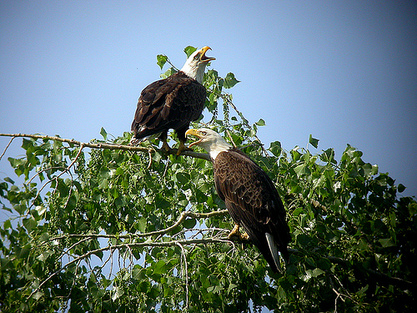 Bald Eagles
Not so long ago, the population of Bald Eagles had crashed and there was great concern that it would disappear as a breeding species from the lower 48 states. However, from their relative strongholds in areas such as northern Minnesota, they have staged a remarkable comeback. Spreading westward across Minnesota, and now North Dakota,  Bald Eagles are now nesting in large areas that have not been occupied since European settlement.

In 2002, a pair successfully nested on the Minnesota shore of the Red River just north of East Grand Forks. Perhaps the same pair nested successfully in 2003 less than a mile away from the first site. These were the first successful nestings known to birders along the Red River in over one hundred years, although there have been unconfirmed reports of nests in the Oslo area during the late 1990s. Once thought to be extremely sensitive to human intrusion, the 2002 nest was located within a hundred yards of a major construction project on the English Coulee. 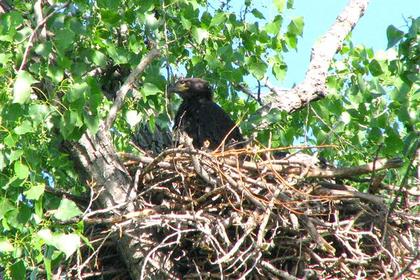 Young Bald Eagle in Nest North of East Grand Forks, Spring 2009
Additional pairs have built nests in the Kellys Slough area, and at Fordville
Dam. Although it is not known if the latter nests have produced young, it seems to only be a matter of time. As recent as 10 years ago, the sighting of a Bald Eagle in the Grand Cities area in the midst of winter was extremely unusual.

But coincident with local nesting pairs, there have been numerous
sightings throughout recent winters. Similarly, the numbers of Bald Eagles
presently seen passing over the Grand Cities area during spring and fall
migration is estimated to be 5-10 times the numbers being seen 25 years ago.

It is great to see the rebound of our national symbol! Although there are some who deny that the rebound has anything to do with discontinuing the use of DDT as a pesticide, there is substantial scientific evidence indicating that this is indeed the case.