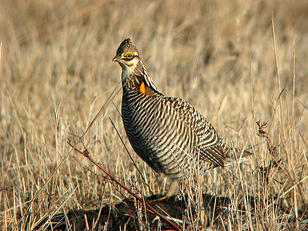 Greater Prairie-Chicken
The Greater Prairie-Chicken Management Areas are a series of tracts totaling nearly 4000 acres that are managed by the North Dakota Game and Fish Department. WMAs are generally open to birders who enter on foot. The boundary corners of the tracts are marked by signs. The tracts are intermixed with private holdings, so please make sure that you don't stray onto private land. To learn more about these tracts and the regulations regarding their use, visit http://gf.nd.gov/hunting/private-land-open-sportsmen. The Prairie-Chicken Management Areas are shown on PLOTS (public lands open to sportsmen) maps that can be found at http://web.apps.state.nd.us/imf/imf.jsp?site=NDGFPLOTSGuide. In fact, a free booklet containing maps for the entire state can be ordered at this site. 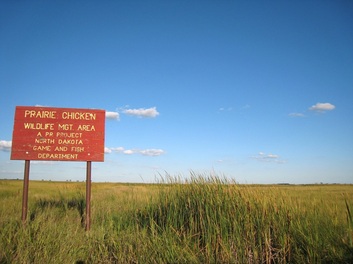 South unit of GPCMA
The original Prairie-Chicken population died out in the 1970s. During the 1990s, Prairie-Chickens were reintroduced and they seem to be doing well. Besides Prairie-Chickens, the grasslands host in the proper seasons almost all grassland species found in eastern North Dakota that are tolerant of relatively thick, tall grass. 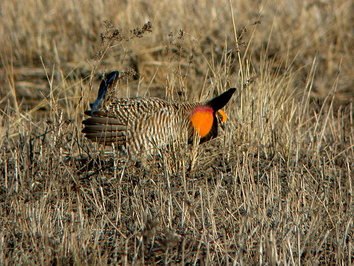 Greater Prairie-Chicken displaying
To access the GPCMAs from the south, take US 2 west from Grand Forks, and then take the Emerado turnoff. Go North past the GF Air Force Base, then past the little town of Mekinock on the left. The road changes from paved to gravel. About one mile past Mekinock, you will enter grasslands (see on Map). For the next three miles, before reaching CR 33 (paved), extensive grasslands occur on both sides of the road. Some of these tracts are marked as GPCMA tracts.

This is where you should look for Greater Prairie-Chickens. Be aware that Sharp-tailed Grouse can also be found here. In many years a Prairie-Chicken lek is active about 1/4 mile west of the road, about 1.5 miles before you reach County 33. Expect the lek to be active from March thru May. 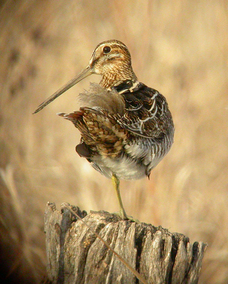 Wilson's Snipe
These same grasslands at the right times of the year host N. Harrier, Rough-legged Hawk, Short-eared Owl, and Snowy Owl. This is also a good area for Yellow Rail, Sedge Wren, LeConte's Sparrow, and Nelson's Sparrow, and all of these species are perhaps more vocal at night than during the day. A period of heavy rain in June or July sometimes triggers Yellow Rails to begin calling about two or three weeks later. In one year, Yellow Rails were calling into late August. Check this area also for Western Meadowlark, Upland Sandpiper, Marbled Godwit, Wilson's Snipe, Savannah Sparrow, and Vesper Sparrow. 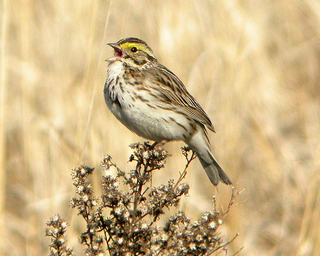 Savannah Sparrow
If you want to survey more of this type of habitat, continue North to CR 33, turn right, go east for two miles, and then turn left onto a minimally maintained road along a drainage ditch (see on Map). ATTEMPT TO DRIVE THIS ROAD ONLY IF CONDITIONS ARE DRY. County Road 1 is five miles ahead. The last two miles or so before reaching CR 1 can be good for Prairie-Chickens and the other species mentioned. A lek that can be seen from the road is located 1/4th mile west, about 1.5 miles before reaching CR 1. When you reach CR 1, turn right. GPCMA tracts are on both side of the road. In a little over two miles after turning onto CR 1, you will reach US 81. Turn right and proceed to Manvel where you can pick up I-29 for the return to Grand Forks. 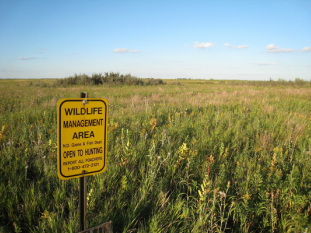 North unit of GPCMA
Next Site