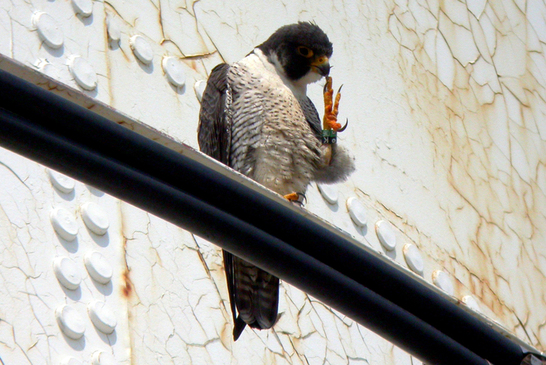 Meet Bear, the male Peregrine Falcon that has a nest on the "Smiley Face" water tower in Grand Forks in the summer of 2008. This image taken June 14, 2008, shows his identification band upside down, with the letter K on a dark background, and the numerals 06, in the light green. Bear was raised in Fargo in the summer of 2005. He adopted the tower as his own in April of 2007, but was unsuccessful in persuading one of the tundra Peregrines passing through to settle down in Grand Forks. He left in October. By April 2, 2008, Bear was back to the tower. On about Apr 13, his new mate, Terminator, arrived at the tower.